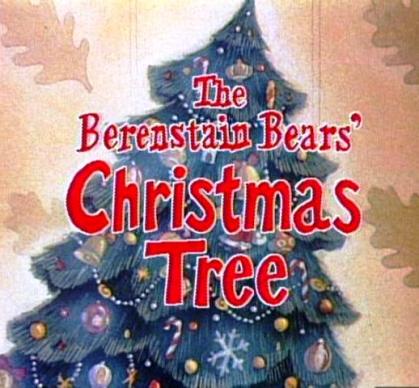 November 13, 1978 – We fly from Charlotte, N.C., the last stop on a Fall promotion tour on behalf of our Berenstain Bears books to meet with a leading animation producer / director.  Object: to try to persuade him to produce a Christmas special about our eponymous bears.

He is tanned, gracious and charming, and assures us that Christmas is a waste of time. The networks have so much Christmas stuff that it’s almost impossible to get a Christmas special on. He suggests that a less competitive holiday would be more appropriate for our bears – Father’s Day, for instance.

He shows us some character sheets for animated specials he has on this Christmas.

November 14 – We ponder less competitive holidays – Father’s Day, Columbus Day, Arbor Day (the bears live in a tree), but visions of sugar plums persist on dancing in our heads.

This isn’t the first time we’ve been stymied or side-tracked in our attempt to get our bears on TV. At various times various networks and producers have variously said, “Animation’s too expensive,” “We’re overstocked right now,” “Who needs more bears on television? We’ve got Yogi, Pooh, Gentle Ben, Grizzly Adams, The Chicago Bears, The Bad News Bears …”

November 15 – We get back to the real world of writing and drawing Bear books and contributing our long-running “It’s All in the Family” (people) feature to Good Housekeeping.

November 19 – As we work on The Berenstain Bears’ Activity Book, the twenty-fourth Bear book in our series, we continue to hear strains of Jingle Bells and Deck-the-Halls in our collective heads.

A Christmas story line begins to generate. We see funny overconfident Papa and his bright helpful little cubs off in the woods. Papa’s carrying his trusty ax. Where’s Mama?

December 5 – The Christmas specials season kicks off. The tanned Hollywood producer is right. The networks have animated specials coming out of their ears – there’s Snoopy, The Grinch, Rudolph, Frosty the Snowman – Christmas specials as far as the eye can see. There is no room on the networks for our bears.

December 8 – Our Christmas story continues to percolate.  Of course, Mama is back in the tree house. Papa and the cubs are out searching for a Christmas tree. Not just any tree, but a really special tree – “Why, bears will come from near and far,” brags Papa, “to see how Christmasy we are!”

December 14 – Since Christmas specials tend to come in bunches we catch some non-animated Christmas shows — a beautiful musical presentation from the First Baptist Church of Dallas starring Tennessee Ernie Ford, a wonderful Gift of the Magi.  The credits indicate they are produced by The Cates Brothers. We had some dealings with Joe Cates some years ago on a non-bear project that never got out of the woods.  Well, somebody’s getting Christmas shows on the air.

December 20 – More story elements materialize. We hear bits of dialogue – Mama Bear saying, “Buy our tree down the road from Grizzly Gus. He is sure to have the right tree for us!”

December 22 – We are in New York seeing our publisher. On the way home we stop at a newsstand, but instead of picking up our usual couple of magazines, something impels us to buy Variety, the show biz weekly. We are startled to find among the arcane headlines about “Boff Grosses” a large Cates Brothers ad announcing their five new Christmas specials.

December 27 – We write Joe Cates seeking his advice. He may not do animation, but he sure does Christmas specials. Perhaps he could advise us. A short meeting. A few minutes of his time. Wouldn’t even have to be in his office. Could be in an anteroom, a hallway.

February 7 – We still don’t hear. We forget about television.

February 8 – Letter arrives from Joe Cates (delayed because of being missent to our old address). The letter is brief and cordial. It says: “Notwithstanding the fact that my kids have about fifteen of your books and I have gone nuts reading them over and over, why not an animated Cates Brothers/Berenstain Bears Christmas special? Stop by and we’ll talk about it.”

February 12 – We arrive at Cates’ office. Mr. Cates is out of the office and will be a little late. We are conducted into Cates’ inner sanctum and asked to wait. Awards and testimonials stud the walls — Emmies, Peabodies, signed pictures of half the stars of the TV firmament smile down at us. We feel like a couple of kids on the White House tour. Cates arrives, greets us and says, “Well, this is going to be a very relaxed meeting.” We look quizzical.  “Because,” he continues, “I just sold a Berenstain Bears Christmas special to the network.”

February 20 – April 8 – A great deal happens over the next few months. We write the script and song lyrics for The Berenstain Bears Christmas Tree. Arrangements are made with Perpetual Motion Pictures, a leading producer of animated commercials, to create the film. Perpetual’s prexy, Buzz Potamkin tells us how many individual animation drawings it will take to produce the film. We faint. (20,000 drawings!).  Director Mordi Gerstein tells us he will need model drawings of the bears — front, side and back views — and of the other characters as well. We draw perpetually for three weeks. Back views of the bears are especially challenging (we’ve never seen them from the back before). Emmy award-winning conductor/composer Elliot Lawrence performs the music he has composed on a tinny piano in a raspy voice. It’s beautiful.

We worry about how Mordi and his animation group will draw our bears. Will they come out looking like the Michelin Man or the Hawaiian Punch person? Associate producer Jere Jacob reassures us on this and many other scores. “Not to worry. They are great bear drawers.” She’s right, on this and many other scores. Auditioning voices: we listen to eight Papas, six Mamas and four-and-twenty Sister and Brother Bears in six hours. Actors are selected. Two days in the space station atmosphere of a high-powered sound recording studio: sound engineer Bob Lifton laughs at two of the show’s ninety-seven jokes. Since he does sound for Saturday Night Live this is considered a good omen.

June 15 – The first seven-second bit of animation is ready. It’s our bears! They walk! They talk! They move! We play it over twenty-seven times …

November 10 – Somehow the thousands of drawings, the myriad vocal and musical effects it takes to make one twenty-six-and-a-half minute animated special have come together — and The Berenstain Bears’ Christmas Tree is done … If you want to find out how the bears discover the true spirit of Christmas (after running afoul of an angry skunk, a roaring blizzard and an ax-wielding eagle), just tune in and see “’how Christmasy” it all turned out.

By Stan and Jan Berenstain